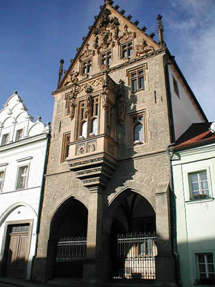 The Stone House is built on pre-Hussite foundations and now ranks as one of the most important monuments of Late Gothic architecture in Europe and is also part of the urban conservation area inscribed on the UNESCO World Heritage List. The house belonged to the burgher Prokop Kroupa, who was promoted to nobility in 1499. This was documented by the knights on the gable. The house’s richly decorated stone gable is the work of master Briccius Gauske of Wroclaw. The house was modified in 1839, and was regothisised by architect Lábler in 1900-1902. During the course of the restoration, for example, a statue of the Madonna by Professor J. Kastner was added. 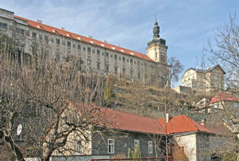 This Early Baroque building was designed by Giovanni Domenico Orsi, an Italian architect born in Vienna, who was an important builder of Jesuit buildings. The experience he gained from building fortresses also manifested themselves in the very thorough construction of the college, including its ingenious ground and sewage water drainage system. Partially preserved plans show that he elected to use an E-shaped floor plan. The current F-shaped floor plan is the result of the fact that the original design was never implemented. Carlo Lurago continued with the building work after Orsi‘s death, with the college being fully completed in 1750. The architecture of the college is relatively austere, in compliance with Jesuit principles, with only the facade reminiscent of Early Baroque Italian palaces. Construction work proceeded slowly, with the Jesuits only moving into the college in 1678, at that time still largerly incomplete. They lived in a makeshift manner for nearly fifty years. An interesting feature is the roofed suspended corridor leading from the college to the Cathedral of St Barbara, built in the 1730s, which was removed, however, at the end of the 19th century. 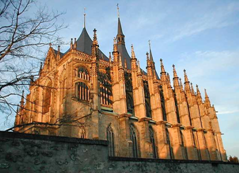 The Cathedral of St Barbara, a jewel of the Late Gothic period and one of the four cathedral-type buildings in Bohemia, was incribed on the UNESCO World Heritage List together with the Cathedral of the Assumption of Our Lady and St John the Baptist and the historical centre of Kutná Hora. The splendor of this structure is tangible testament to the fame and riches of the silver Kutná Hora as well as of the deep devotion of its creators. The cathedral is dedicated to Virgin Barbara, an early Christian martyr, invoked as a helper in need, an intercessor for a good death, and a patron of all who carry on a dangerous occupation, especially miners. And it was in fact miners who contributed the most to the medieval town‘s blossoming as well as to the construction of the cathedral, which they dedicated to their holy protectress.

This website uses cookies to improve your experience while you navigate through the website. Out of these cookies, the cookies that are categorized as necessary are stored on your browser as they are essential for the working of basic functionalities of the website. We also use third-party cookies that help us analyze and understand how you use this website. These cookies will be stored in your browser only with your consent. You also have the option to opt-out of these cookies. But opting out of some of these cookies may have an effect on your browsing experience.
Necessary Always Enabled
Necessary cookies are absolutely essential for the website to function properly. This category only includes cookies that ensures basic functionalities and security features of the website. These cookies do not store any personal information.
Non-necessary
Any cookies that may not be particularly necessary for the website to function and is used specifically to collect user personal data via analytics, ads, other embedded contents are termed as non-necessary cookies. It is mandatory to procure user consent prior to running these cookies on your website.
SAVE & ACCEPT
DENNÍ MENU